Let’s start by defining our terms. The meaning of ’manuscript’ is obvious enough; it refers to texts written by hand (i.e., not printed). However, the meaning of ’illuminated’ in this context may be less obvious. The word ’illumination’ derives from the Latin noun lumen (light) and more directly from the verb illuminare which, in classical Latin, could mean “to brighten or adorn with rhetorical or other literary embellishments.” Thus, ’illumination’ here involves “the art of lighting up the pages of a book with bright colours and burnished gold” (Anderson, Illuminated Manuscripts, p. 30). Or, as Robert G. Calkins (Illuminated Books of the Middle Ages, p. 15) has put it, “in the narrow sense of the term illumination refers to any ornament to which gold, silver or bright colors have been added.” By these definitions, illuminations include miniatures (pictures), decorated letters, penned calligraphic flourishes and border or marginal illustrations. Illuminated manuscripts are among the most beautiful, impressive, and plentiful objects to have survived from the medieval era. They are sometimes stunning examples of the intersection between text and image, and thus are of as much interest to art historians as they are to bibliophiles and collectors.

In the European Middle Ages, various kinds of books were illuminated, and the illumination served various purposes. Not surprisingly, religious books such as the Bible and liturgical works were frequently and sometimes lavishly illuminated. But illuminated manuscripts of secular works of literature, history and law were not uncommon. In the late Middle Ages, prayer books known as Books of Hours became increasingly popular, and many of the best known examples of illuminated manuscripts belong to this category of book (e.g. the Tres Riches Heures du Duc du Berry). 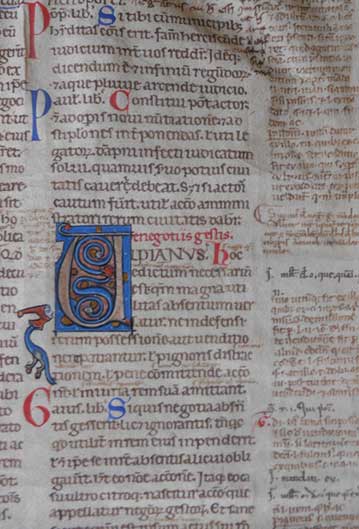 Illumination could obviously be used to illustrate a text, but, as noted, illumination involved more than just pictures or miniatures. Decorated letters were used to indicate the first word in a new section of text (see accompanying image to the right). As Christopher de Hamel (British Library Guide to manuscript Illumination, p. 24) has observed “decoration is a device for reading a text as sophisticated as punctuation is today.” Similarly, headings, usually in red ink (from rubrica meaning “red ochre” - hence our word “rubric”) might distinguish one section or type of text from another (see accompanying image). These various uses for illumination had the benefit of making the text more memorable either by providing relevant images or by dividing the text into more manageable segments. The occasional marginal doodlings (sometimes called “drolleries”) found in many medieval MSS seem to have no clear purpose, but they can be very amusing (see accompanying image).

The nature, style, and centers of manuscript illumination changed from the 5th to the 15th century. These chronological and geographical changes, many of which parallel larger shifts in European art history, can be quite helpful in dating and placing the MSS in which the illumination occurs. One noteworthy trend over this thousand year span is that illumination seems to have become an increasingly specialized activity. The scribe and the illuminator collaborated, but theirs were two distinct enterprises.

Many famous book collectors - J. P Morgan comes to mind - counted illuminated manuscripts among their most treasured possessions. For the contemporary collector who isn’t a Morgan, individual illuminated pages rather than entire illuminated books make an affordable and readily available option. Perhaps lamentably, many illuminated manuscripts have been broken up and are sold in this way. Prices often vary depending on the size of the page, on the quality and extent of the illumination, and sometimes on the significance of the text. Like the study of illuminated manuscripts, owning them - if only a single leaf - can be both esthetically pleasing and even illuminating.