Home > About Biblio.com > Our Story 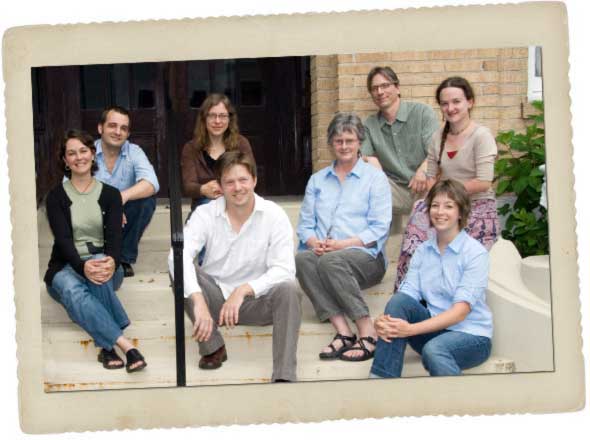 There is something magical about a corner used bookstore. The kind that are scattered across the world, where the faint smell of aging cloth and paper mingles with the quiet shuffle of pages, of covers sliding against each other as they are taken from their shelves. There is something that literally jumps inside of us when we enter these nearly hallowed community mainstays.

It's something a little more than just the senses. Something more than the thousands of books waiting to be experienced for the first time. Something that's a throwback to an age that's slowly disappearing in our fast paced world. Something like walking right into the chapters of a story: a story that rolls up The Count of Monte Cristo, Don Quixote, It's a Wonderful Life, Lord of the Rings, and Star Wars all into a single, magnificent epic that both embraces and turns us loose.

We strive to be a part of that epic.

In a world increasingly globalized and seemingly spinning faster, we are working to position ourselves somewhere between the old and the new, somewhere between our local community and the world around us, between dreams and practicality, between profit and social responsibility.

We want to be a local business working in a global community. In short, we strive to be a very different kind of business in a very familiar way.

Not your grandfather's bookstore? Think again.

I'll admit, my grandfather didn't own a bookstore, he owned a retail clothing store in small town Kansas. Although he had tweed jackets instead of dust jackets, there was no difference between his shop and the bookstore on the corner in your own hometown. The transaction was based in relationship and trust. There was a courtesy and passionate knowledge. I'm only in my mid-fourties now and barely saw the last days of his business as he retired, but I love the old way of doing business. We've lost a little something along the way, and let business become too, well, business-like.

I've always passionately adhered to the value of small, independent businesses. We all know that it's them, not mega corporations, that are responsible for economic growth and job creation. More importantly, small businesses keep something alive in us, they keep us part of a community, and, ultimately make our lives better and more enjoyable.

Every great story has a personal touch.

I started my bookstore in the 1990s, because we believed in just that sort of community, and it seemed to us that used bookstores were one of the last bastions of the truly era of small businesses. And, as the internet grew, the book business evolved, too. A customer in Ontario was suddenly finding books they had been seeking for years from bookstores in Dallas and Paris. A grandmother in New Orleans found her grandchild an obscure book she had read as a child in a bookstore in Maine. It was truly a splendid thing.

But, there were warning signs, too. As large, well-funded ventures moved in to facilitate this commerce with expansive marketplace sites, books began to be thought of as "products", and bookstores were considered "vendors." Customers were "page-hits." The values driven experience and relationship that develops between a customer and a small, community business began to dry up.

Something valuable was getting lost, and we didn't like it.

When Biblio.com launched as a marketplace in February, 2003, some in the industry dismissed us or laughed at us. We were "chasing windmills". Over a dozen small marketplace sites already existed, and no one saw room for yet another marketplace.

Undeterred, we began to recruit booksellers to trust us with their inventory. We did this the old-fashioned way, forming relationships, opening dialogues, and - most importantly - listening to these professionals. We listened to our customers, we adapted to their needs, and shaped our learning experience around them. And, slowly, we gained the trust and respect of a small but loyal base of customers and booksellers.

I've always objected to the idea, as a customer, that I can be "acquired." Yet, modern industry rings feverishly with the phrase, "customer acquisition."

As a customer, I don't mind being helped, talked with, served, even sold to. But I won't be "acquired".

The difference again is relationships. That's where we began our business, and how we grow our business, even now. While most of the other book marketplaces have closed down or sold out, we have quietly, steadily retained and even grew our marketshare. While our competition fought endless price, margin, and size wars with one another, we concentrated on having better products and better relationships with our customers. And, so, while the rest of the online used book industry was growing at 33% annually, we were growing at 133%.

You might think that would be enough for us.

A great bottom line, is only as great as what you use it for.

A triple bottom line means working towards the three goals of achieving profit, serving people, and preserving the environment as the benchmark measurements for a company's success. When "social entrepreneurship" was little more than an academic buzzword, we made our commitment to a triple bottom line.

We funded and built our first public library in rural Bolivia in 2004 - even before we became profitable as a company. That year we grew in inventory by about 10,000,000 books, had our first news article come out in a local business journal, sales went up several hundred percent, built our first library from the ground up, and we ended up losing almost $50,000.

OK, so we missed the profit part of our triple bottom line, but that was fine by us. We decided that we needed to give even when it hurt, when we couldn't afford it. That kind of trial by fire forges core values.

We lost a little bit of money the next year, too. So, we kept it up. We founded (and funded) our non-profit foundation, Biblio Charitable Works (BiblioWorks, for short) in the autumn of 2005. The next month, we filled a freight container bound for South America with over 10,000 books, dozens of working computers, and educational materials. We did it about a year later - this time, with 12,000 books and untold thousands of dollars worth of donated library furniture from Brodart.

Since 2005, we have built 16 more community libraries in Bolivia. We have formed close partnerships with local organizations such as Asheville-Buncombe Education Coalition. We've held annual book drives. We offset every aspect of our business operations (including the shipment of every book sold!) by purchasing carbon offsets that are invested in renewable energy on small farms across the country. We've created great jobs for people, both locally, and in impoverished Bolivia. We've distributed thousands and thousands of books to underprivileged children, inmates at local prisons, guests at local homeless shelters - and pretty much anyone who we could put a good book in the hands of.

And, yes, somewhere along the way, we actually managed to get around to achieving the profit part of our triple bottom line.

Every great story has a quest. Someone has to fight, and fight hard, to make people's lives better. Otherwise, who cares if someone finds buried treasure?

We've grown, but we've proudly maintained our original vision, becoming a local bookstore on a global scale. Every day we enable our customers — over a million book lovers from every country on earth — to find high-quality books. We've helped people get books they've spent years trying to find, and in the process, we've helped forge lasting relationships between book lovers and independent booksellers. Our technology bridges geographies to help customers form old-fashioned relationships with small corner bookstores around the world.

Every day, we help small businesses in 50 countries develop and grow their businesses. We provide them with technology and tools that allow them to establish and strengthen their identity. We enable them to connect with their customers, and form new relationships.

We love what we do. We love it because we have a chance to do something positive for the world around us. Every day we strive to do a little something more in addition to our jobs. Some days we create strategies for reducing our consumption in our office, reusing and recycling more, composting what we can. Some days we collect, sort, and distribute free books to those in need.

We're fortunate to do work we love, while making the world a little better along the way. We're proud of our achievements, but we're even more proud of who we've become as a company.

The story of Biblio is constantly moving forward and changing, while our triple bottom line remains constant. We don't know the end of this tale, but we can't wait to find out!

Thanks for sharing this, our story, with us. And thank you for letting us be a part of your story, too.

Home > About Biblio.com > Our Story