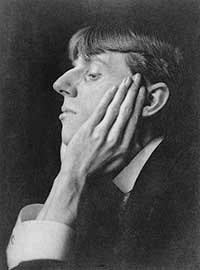 Aubrey Beardsley (1872-1898) was an English artist who became a leading figure in the Aesthetic movement and a significant contributor to the development of Art Nouveau. Beardsley’s only professional instruction was a few evening classes at the Westminister School of Art in 1892, provoked by his meeting with artist Sir Edward Burne-Jones. Later that same year, Beardsley travelled to Paris, where he discovered what would become two of his major influences: the poster art of Henri de Toulouse-Lautrec and the Parisian fashion for Japanese prints. Beardsley’s first commission was illustrating J. M. Dent’s edition of Sir Thomas Malory’s Le Morte D’Arthur (1893), a massive work containing hundreds of different illustrations, chapter headings, and vignettes. Around this time, Beardsley co-founded The Yellow Book, a quarterly magazine, with American writer Henry Harland, and served as art editor, producing cover designs and many illustrations.

The commission to illustrate the English edition of Oscar Wilde’s Salomé (1894) was perhaps one of the most important in Beardsley’s career. His work for the play showcases his signature style: bold black and white designs of perverse and grotesque images. The obvious sensuality of the women in the illustrations, containing elements of morbid eroticism, caused public controversy. But his licentious tendencies became even more pronounced with his illustrations for a privately printed edition of Aristophanes’ Lysistrata (1896). In the style of Japanese shunga art, Beardsley’s work for the comedy features multiple depictions of enormous genitalia. Around this time, Beardsley also co-founded The Savoy, a sort of progressive successor to The Yellow Book, with his publisher, Leonard Smithers, and writer Arthur Symons. Beardsley again served as art editor for the magazine, often incorporating extracts from his novel in progress, Under the Hill. His other major illustration projects include Alexander Pope’s The Rape of the Lock (1896), Ernest Dowson’s playlet The Pierrot of the Minute (1897), and Ben Jonson’s Volpone (1898) as well as the illustrator’s own A Book of Fifty Drawings (1897).

After a life-long battle with tuberculosis, Beardsley moved to the French Riviera as his health deteriorated. Near his death, Beardsley converted to Roman Catholicism and reportedly begged Smithers “to destroy all copies of Lysistrata and bad drawings... by all that is holy all obscene drawings.” Smithers disregarded Beardsley’s wishes and continued to sell reproductions as well as forgeries of the illustrator’s work after his death in 1898. In light of impending bankruptcy, Smithers issued a pirated edition of Salomé in 1904, which was the first to contain all sixteen of the drawings of Beardsley’s drawings originally intended for the play. Additionally, Beardsley’s novel Under the Hill was unfinished at his death and with Smither’s bankruptcy, publisher John Lane acquired all the surviving material for the book, including most of the pictures. Lane issued a heavily censored, though illustrated, version of the manuscript in as Under the Hill (1904). Smithers pirated a version of the novel under Beardsley’s original title, The Story of Venus and Tannhäuser (1907), without illustrations, but with a mucher fuller text than Lane’s edition.